So many ping pong balls riding on this game.

It’s a sad and pathetic goal to hope for, but fans of both the Lakers and 76ers were most likely rooting for their team to lose tonight in hopes of upping their lottery chances. Thankfully, for those who refuse the ‘Tank Thinkology’, tonight was an entertaining game between two teams who are just trying to finish their disappointing seasons knowing they did their best.

18-56 versus 19-53 – Expectations for this game were quite low, but darned if these two young teams didn’t make it an exciting game anyway. The Sixers, like the Lakers, had five players in double figures and one with a double-double. The home team led by as much as 13 points in the first half, until the third quarter when the Lakers overtook the game with a seven-point advantage. The fourth quarter was hard-fought, with the Lakers falling back into a deficit and having to claw their way back to a tie game at the end of regulation.

The extra five minutes of overtime, however, finished in the Lakers’ favor, 113-111.

Mizzou Represent – Jordan Clarkson’s near future may be more certain than that of his old college teammate, Jabari Brown, who is at the end of his second 10-day contract; but Brown made sure to pose some difficult decisions to Laker management. Tonight, he scored a career-high 22 points on an efficient 7-of-10 from the field, 3-of-4 from downtown, and a perfect 5-of-5 from the free throw line. In the 10 games he’s played with the team, he’s averaged 9.4 ppg in 24.5 minutes per game. The Lakers only have nine more games left, so they must either cut Brown loose after tonight, or keep him for the rest of the season. As for his good friend, Jordan Clarkson, how much more praise can a rookie get?

In December, he played six games out of the 15 on the team’s schedule, and he averaged a minuscule 3.8 ppg and 0.7 apg in 9.5 minutes per game. In March, he played in all 16 games and averaged 15.8 ppg, 5.2 apg and averaged 32.5 minutes per game. His growth on the court has increased exponentially, not only his physical skills, but his acumen as a player as well. His mental strength, as a rookie, is impressive. Flung into the starting line-up after mere patches of playing time, he absolutely flourished. He’s made clutch free throw after clutch free throw, including tonight; and with the clock winding down and his team with a chance to take the lead for good, he cut to the hoop when teammate Wayne Ellington was trapped, and called for the ball to make the game-winning layup. His leadership and management of the floor in tonight’s game was as solid as we’ve seen this season from Clarkson, and he reached a career-high 11 assists to show for it. Add to that, his 26 points, six rebounds and three steals. 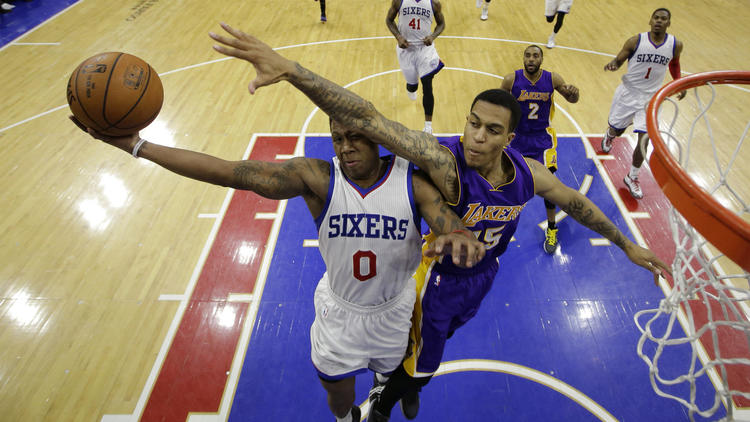 Threeball – Along with Brown’s three three-pointers, came seven more from two players whose college pride run deep – Duke’s Ryan Kelly and Carolina’s Wayne Ellington. Threes, at any point in the game and especially when the lead changes are frequent, are game changers. Kelly, who hit 3-6, finished with 16 points, seven rebounds, four assists and four blocks. He really is that stretch four who forced the Sixers to defend the perimeter this evening. Ellington, who returns to his hometown Philadelphia for the first time since his father’s tragic death, contributed 20 points on 7-15 from the field, grabbed three rebounds and handed out three assists. 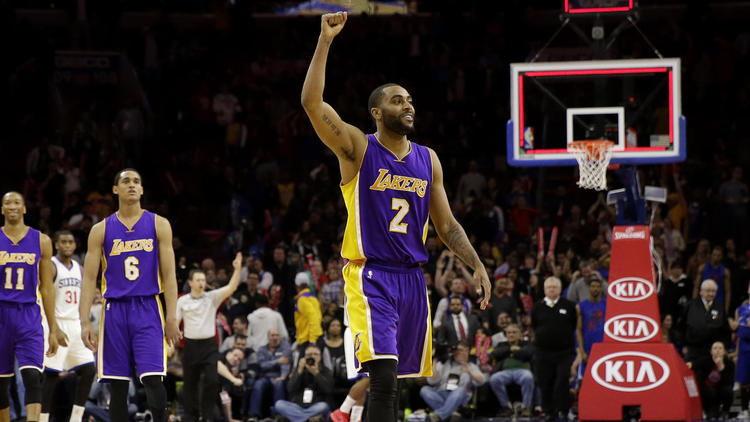 Making Do – The Lakers played just seven players tonight. Four had to play between 42-43 minutes, but like they’ve done all season, they’ve made do with what and who they have available. Carlos Boozer and Ed Davis sat out, as did Jeremy Lin, who has been diagnosed with an upper respiratory infection. Wes Johnson, who has a habit of making a difference in one game and then disappearing the next, also had a good game, scoring 12 points on 5-16 from the field, led the Lakers with 11 rebounds, had two steals and blocked three shots.

Foul Trouble – Tarik Black and Jordan Hill both fouled out of the game. Early foul trouble will do that. Hill, who sat out a few games on this road trip, looked like he hasn’t played in a few days, finishing with an uncharacteristic five points on 2-8 from the field. He did, however, collect 10 rebounds. Black scored six points on 2-3. 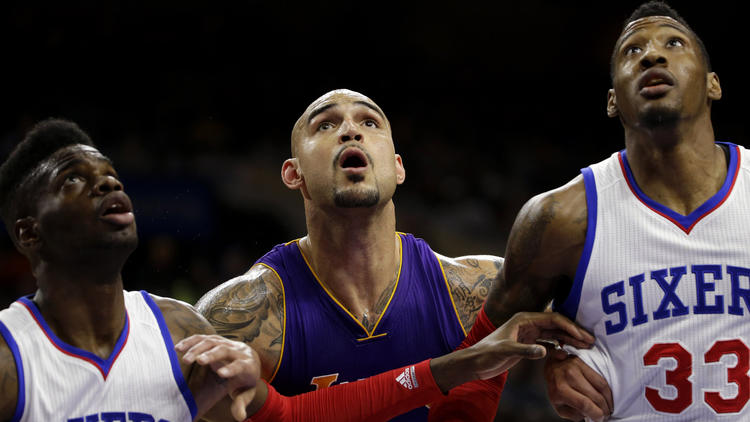 This was the Lakers’ 10th overtime game this season, the most of any other team in the league. Perhaps more overtimes are on the horizon with nine games left. Next up – the Pelicans.